In 16th century Spain the catholic noblemen living in a small town are doing well, live their lives in peace until one of them is found brutally murdered on the street. Local sheriff is taking up the case, but soon finds that it’s not gonna be easy to get to the truth. When second noble is killed with a single letter carved in his chest sheriff realizes that there must be some plot behind it, but soon he finds any signs of murderes cleaned and bodies removed. When he starts to ask questions the families of the victims they claim that the people he saw slaughtered on the streets are actually alive, but at this time away from town.

Mystery movie set during the times of Inquisition when Maurs where no longer thread in Spain and Jews were forced to change religion or to be expelled from the country. In those uneasy times local sheriff has to face the complicated case and the locals, that he knew all his life, are not interested in revealing the truth. Good cast, good plot, but there are some flaws in narration which only makes it average mystery movies even though it could have been much better. 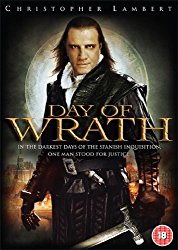 Creators of Day of Wrath


Cast of Day of Wrath