Police detective Nick Cafmeyer is called to take part in investigation in unusual crime - someone has broke into a house, tied the parents to pipes and took their young son Robin. Cafmeyer has his dark past that still haunts him - when he was a kid his younger brother disappeared, most likely kidnapped by a pedophile Ivan Plettinckx, who lived nearby. Now as a grown man Nick still can’t forgive himself that his brother vanished after an argument they had and feels guilty he did not find him. Plettinckx is released from prison and Cafmeyer suspects he could have something to do with kidnapping of Robin. Unfortunately due to high temperature both parents were badly dehydrated and they can’t give a statement before medical treatment. Even when Robin’s father is fit to give statement his story gives the police very little informations - they were assaulted in the house and the kidnapper made him choose between him and his son, but there is no way to learn the details. Cafmeyer wants to pin this crime on Plettinckx, but when body of Robin is found high in the trees he has his doubts if elderly pedophile would be able to overpower both parents and carry the child. Nevertheless in order to find the killer Cafmeyer has to face his own demons and sink into the dark world of pedophile network.

Belgian crime mystery movie based on a British novel The Treatment by Mo Hayder, presents the dark and cold reality of police investigation into a kidnapping and murder of young boy. The main character, detective Cafmeyer, has to find more information that he was able to gathered in case of his own brother, who probably was also kidnapped by pedophile years ago. The crime is unusual, the plot involving, the reality cold and dark - everything that is needed to keep the viewers interested from the beginning till the end. 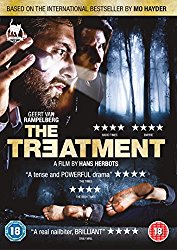 Creators of The Treatment


Cast of The Treatment