Florence is wife of wealthy businessman Simon Carala, but she has an affair with one of her husbandâ€™s employee, ex-military Julien Tavernier. Together with Julien they have came up with the plan how to get rid of her husband - since he is very private man Julien will climb to the top floor of the building without other employees noticing anything, shoot Simon and puts everything so it would look like a suicide. Their plan works, but when Julien was climbing down back to his office phone on his desk rings. He rushes down and answers it, then leaves the building with rest of the staff. Until he reaches his car he doesnâ€™r realize that he left the rope hanging outside the building that would lead the police straight into his office. While he deals with it and gets into elevator the guard, who is about to leave the building, switches off the power leaving Julien trapped in the elevator. Julien left his car with motor running and young couple takes it for joyride. Florence, waiting for Julien in a restaurant, sees his car passing by with a girl in the passenger seat and begins to think that he dropped the whole plan and left her for younger woman.

Classic crime movie that shows how badly even the best laid plans can end because of simple coincidence. With each tiny detail the story gets more and more complicated - Julien is caught in the life that he canâ€™t leave, joyriders keep getting him into trouble, Florence thinks she was doublecrossed by her lover. Well developed script, good acting and directing plus Miles Davis in the soundtrack makes it one of the classics.

Watch Elevator to the Gallows 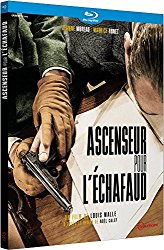 Creators of Elevator to the Gallows


Cast of Elevator to the Gallows