FBI Agent Wesley Doyle is called to his office in the middle of the night. For a long time he is on the case of serial killer that named himself God’s Hand. A man called Fenton Meiks requested an urgent meeting with Doyle stating that he knows exactly who God’s Hand really is. It isn’t first time Doyle hears something like that, so he is skeptic, but lets Meiks tell his story.

The story goes back many years, when Meiks was young and his father had a religious enlightenment. He told his two sons that God himself showed him what he should do - find the demons that pretend to be normal human beings and stop them from doing evil things. He also send him a tools to do this job - an ax and a pair of gloves. From that day their lives have changed forever. Meiks was trying to keep his sanity when his father begun to actually see the demons in the streets, but when his brother convinced himself he see them also Fenton felt he is in danger.

Frailty is one unusual mystery and crime movie - the gloomy atmosphere, the memorable plot, the sheer terror that comes from the obvious schizophrenia growing up in the father that changes the lives of his sons. Movie worth to see for many reasons that can’t be described in the review not to spoil the experience for the viewers. 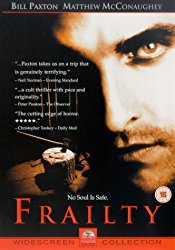 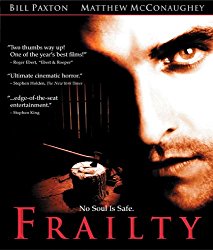