Alexandre Fayard becomes famous for his detective novels, but he is also a college professor and a great fan of legendary Japanese writer Shundei Oe, the master of gruesome stories. Fayard is travelling to Japan to promote his new book and hopes to find some more informations about Oe, who has never revealed his real identity. His guide during that trip, Ken Honda, tells him that there might be a way to learn who Oe really is by checking the contract with the publishers. Fayard is also approach by a geisha girl, who has interesting story to tell. She once dated a young man, but when she turned down his proposal he became dark and even violent, later he started to stalk her. She believes that her stalker is Oe.

French mystery movie with good atmosphere that involves gloomy character of mysterious Japanese writer and interesting plot, but overall the final effect is rather average and predictible. Good attempt, but the story could have been better.

Watch Inju: The Beast in the Shadow 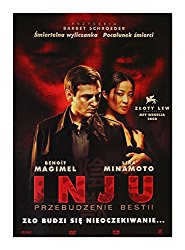 Creators of Inju: The Beast in the Shadow


Cast of Inju: The Beast in the Shadow