Virgil Oldman is one of the most esteemed art expert, who is also running an auction company. He is rich and rather eccentric, thus he does not take just any job that he is offered. This time a young heiress of large art collection, Claire Ibbetson, contacts him asking Oldman to take care of preparing the items for auction. But when he visits the impressive old villa to take a look at the collection Ibbetson fails to show up. Angered Oldman leaves, but when she contacts him again with rather poor excuse he reluctantly agrees to come around again.

This time he is greeted by the housekeeper, who says the Claire was again unable to meet him, but wants him to start the cataloging straight away. Oldman doesn’t want to be treated that way, but when he finds something that looks like a rusty part of a clock, he agrees to take care of the collection. He takes the part he found to a mechanic named Robert, who also thinks it is very old and could be a small part of something worth a lot of money. When Claire again doesn’t show up to meet him Oldman is determined to get to the bottom of it. Soon he discovers that she is suffering from agoraphobia and she did not left the house in many years. More and more intrigued Oldman begins to fall in love with the woman. Also he finds other small mechanical parts around the house and finally finds out what they are for.

Interesting mystery movie that on surface seems to be just unusual love story, but from some point the romance fades away and is replaced by puzzle of human emotions and cat-and-mouse games. Great cast, involving plot and intiguing mystery - every bit of this movie worked really well. 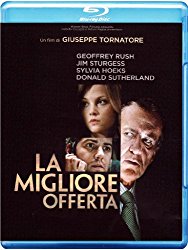 Creators of The Best Offer


Cast of The Best Offer