Young woman Judith Jansen starts her job as prosecutor assistant and her first case is investigation in death of a infant in one of the hospitals. The doctor put in the documentation that the baby was stable, but half an hour later the baby is dead while being under the care of one nurse - Lucia de Berk. While the prosecutor gathers the informations the hospital manager points out that this is not the first time that child dies while under the care of Lucia and from statistical point of view it seems impossible that this could be coincidence. De Berk is soon arrested and put to trial. The evidence against her are very slim - the suspision that she might have given the child medications that caused death, the grim past of Lucia (while teenager she was forced to prostitution by her mother), ambiguous entries in her diary and the fact that she had books about serial killers. Nevertheless she is found guilty of at least five murders of infants that were under her care. The prosecutor is happy with the result, but new informations that Judith have gatheres makes here believe that Lucia might be in fact innocent. Unfortunately her superiors donâ€™t want to reopen the case...

Film based on true story of Dutch nurse that was convinced of several murders and sent to life imprisonment even though there were no direct evidence of her guilt. The movie shows her battle against the justicy system. Well made drama shows how helpless we can be against the ill will of the people with power. 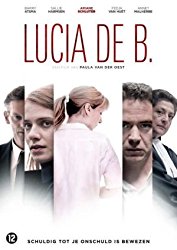 Creators of Lucia de B.


Cast of Lucia de B.