In 1986 in Gyunggi province of South Korea police finds the body of a young woman raped and strangled in the ditch in the middle of rice fields. They start the investigation when second body is found. The local police is not prepared to deal with serial killer and an officer from Seoul joins the team. Together they have to find the killer before he strikes again.

Based on the real events of serial killer case in South Korea in 1980s this film is the most gripping and crime movies in decades. Despite showing what seems to be a routing investigation it keeps the viewers involved for the whole two hours. Great movie, far better than most of the European and American productions. 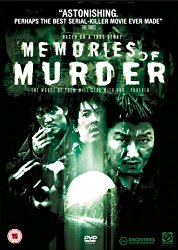 Creators of Memories of Murder


Cast of Memories of Murder

In 2019 the real Hwaseong Strangler was identified through DNA match as Lee Choon-jae, who was at that time serving life sentence for rape and murder of his sister-in-law. Later Lee confessed to murders and attacks on women in Hwaseong and nearby areas, however due to statute of limitations he could not be prosecuted for those crimes.