Law student Martin Bells takes a job as a night watchman in the morgue. The old guard shows him the ropes and informs him about all the strange things that are in the building, including the laboratory that contains the parts of human bodies and a room at the end of the corridor where the corpse are left waiting for autopsy. In that room over every body there is a cord turning on the alarm that will notice the guard that there was a mistake and the person is actually alive. The gloomy atmosphere of the place is getting to Martin, especially when the police brings another prostitute murdered by serial killer. One night the alarm goes off...

Remake of Danish thriller about young student trying to adapt to the job of night watchman in a morgue. Extraordinary atmosphere of the place and the ongoing police investigation are creating a very tensed atmosphere. Great performance from Nick Nolte as washed out police detective is the cherry on top of decent mystery movie. 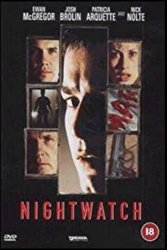