Successful pulp fiction writer (if there is success in that line of work) Mickey King, currently residing on Malta, is given unusual offer to write a biography as ghost writer. A man, who looks like oldfashioned mafia thug, offers him a good money for writing a biography, but won’t tell King who exactly is the client. King is not very keen to accept, but the offer is too good to refuse. He is given the instructions to join the tour of an island during which someone will contact him with further details. The man that meets him on the bus acts strangely and during the stay in hotel King finds him dead in the bathtub after they swapped the rooms. King begins to feel like character in one of his novels and tries to figure out what exactly is going on and who is after him.

British thriller, with elements of comedy and I don’t mean Michael Caine’s glasses, that takes place on sunny Malta, where everything seems to be lazy and quiet. At least until someone is killed. Pulp fiction writer relive story that could take place in his novels and uses his cynical mind to get behind the lies that he is told. 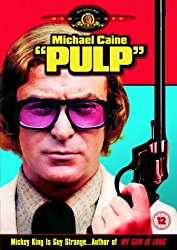