Dark street somewhere in post-war Berlin, man enters the phonebooth and dials a number, few seconds later he is shot dead. It turns out to be a British agent and now Quiller is brought to Berlin to replace him. His controller, Pol, has only one task for him - to find a Nazi organization called Phoenix and locate their headquarters. They both know it’s not gonna be easy - the Nazi don’t wear uniforms anymore, so they can’t be just spotted in the streets. Quiller checks the meager clues he has when he is kidnapped. He wakes up surrounded by the Phoenix members, who are prepared to torture him in order to get informations about the British intelligence in Berlin.

British spy movie based on a novel The Berlin Memorandum is another production that deals with the fate of the Nazis after the war - this time British intelligence is trying to find one of the organizations and destroy it. While the film presents in realistic way the atmosphere in post-war Berlin the film is average at best even despite quite impressive cast. 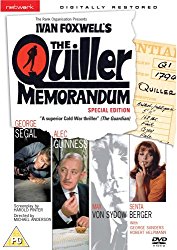