British plane landing in Scandinavia country is hijacked by the group of terrorists. Second group of the hijackers takes over the house of British ambassador and keeps him and the residents demanding the ransom. Colonel Tahlvik of the local police starts the investigation and from start suspects that nothing is what it seems in this case.

Very good, but overlooked, gem of criminal drama from 1970s with very interesting plot and good cast. What starts as a simple hijacking story keeps the viewers gripped until the end. 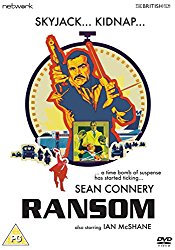