Doctor Cara Harding is psychologist, who specializes in multiple personalities, and also a single mother since her husband has been brutally killed by a mugger. While returning from another session with criminals she gets a call from her father, also a psychologist, who thinks he has a case that she would find interesting. In her father’s laboratory she meets David, a young man in wheelchair that seems absolutely normal. At least until her father phones him and asks if he can speak with Adam. Cara returns to the room and finds that Adam is completely different person - not only he is colorblind (while David isn’t), but also... he simply gets out of the wheelchair and walks. Cara, who as scientits, always keeps her feet on the ground, begins the tests of the patient and discovers that even his X-ray images are different - David really has damaged spine and should not be able to walk. She begins to check the background of David and fings that David Bernburg grew up in small village full of weird characters. Cara finds the mother of David and learns that he was murder in the woods - it begins obvious that Adam took the personality of David. But when people involved in the case begin to die in strange circumstances Cara begins to fear the she or her daughter could be next victim.

Film based on the script by Michael Cooney, author of Identity, and in many ways it seems like 6 Souls is just a copy of what he did in Identity - again we have multiple personalities, again we have mysterious deaths, the atmosphere of the movie is actually quite good (on the verge of horror and mystery), but overall the build up fails to deliver and the feeling of disappointment is almost certain. 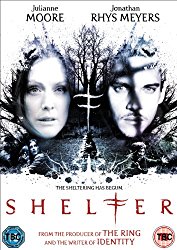