Rex and his girlfriend Saskia are taking a road trip during their vacation. After a trivial tiff they make a stop on the busy service station, where Saskia suddenly disappears. Rex searches the whole place, asks police for help, but there is no sign of the girl. Three years later, even though he has new girlfriend, Rex is still hanging posters and appeal on TV hoping to find any sign of Saskia. Soon he receives information... from Saskia’s abductor.

Tense movie showing how deep could be trauma after the disappearance of close ones. Rex becomes almost insane of the uncertainty and helplessness. But the trip to find the truth will take him into the mind of psychotic serial killer... and further.

The plot is rather simple, but the movie is very powerful and is one of the best mystery movies ever. 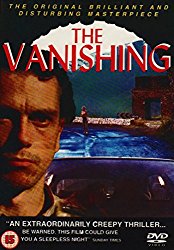 Creators of The Vanishing


Cast of The Vanishing