Cal McAffrey, a seasoned investigative reporter, tries to get information about the murder of a young man carrying a briefcase and pizza delivery boy, who was a witness of the shooting. Soon another news on TV brings his attention - Sonia Baker, assistant of congressman Stephen Collins, is killed by metro train. The media are all over Collins when he walks out of the conference while asked if he knew that Sonia was pregnant. For McAffrey this story is important, because he knows well Collins - they were roommates at university and later Cal had an affair with Collins’ wife. Nevertheless in that critical moment of his career, when every journalist in the country thinks he had an affair and his assistant killed herself, Collins comes to McAffrey for help. He admitted to having an affair with Sonia, but shows Cal video Sonia made the morning she died, which proofs that suicide is out of question. While trying to find some more informations McAffrey is approached by Della Frye, a blogger, who works for the same newspaper, but he brushes her off. Cal follows the lead Collins has gave him that PointCorp, a private security contracor, is out to get him to stop the congres investigation. Unfortunately for Cal soon he needs help from Frye to find more about Sonia. Reluctantly he agrees to work with her and helps her get in touch with detective in charge of the investigation, but while she is in hospital, where the pizza boy was in ICU he is shot dead by a sniper through the window. All the elements begin to fit in the McAffrey theory.

Mystery thriller based on the British mini-series shows the investigative journalism on the edge of politics, big money and the crime that follows them - all of it mixed in interesting plot with good cast and skillful directing. 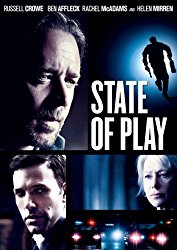 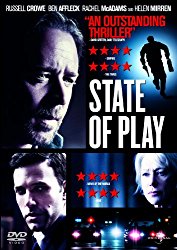 Creators of State of Play


Cast of State of Play