Mutilated body of young woman Elizabeth Short is found on the empty lot in Los Angeles. Two police detectives start the investigation that will lead them to a dark side of the city.

Film based on a true murder of Elizabeth Short was made in a style of film noir and the creators have followed one of the theories behind the murder - that she might have been only one of few such victims. Unfortunately the murder and investigation is only a part of rather long film and the other subplots were not interesting enough to keep the movie flow smoothly. 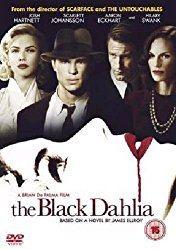 Creators of The Black Dahlia


Cast of The Black Dahlia