Dean Corso is a New York rare book dealer that won’t past any opportunity for a good deal even if it means doing something unethical. Call from wealthy book collector Boris Balkan sets him on trail of very rare 17th-century book, The Nine Gates of the Kingdom of Shadows by Aristide Torchia. Balkan has recently bought one of he three existing copies, believing that this is the only real copy while both others being forgeries. He hires Corso to confirm his suspicions even though he knows that gaining access to other two copies won’t be easy. His own copy previously belonged to Andrew Telfer, who committed suicide soon after selling the book, and his widow not is trying to seduce Corso. She was hoping to get back the book, which was bought for her, but when this doesn’t work she becomes violent. Corso’s friend, who was keeping the Balkan’s book for him, is murdered and his body posed similiar to one of the illustration in The Nine Gates. Corso quickly leaves the country and goes to Portugal, to visit owners of other copy, where he learns that the stake might be much higher than simply rare and valuable books.

After the success of The Da Vinci Code many authors became "inspired" and wrote similiar mystery books that connected the historical facts, the legends and the art - some of them came clos to the level of The Da Vinci Code, some of them were rather laughable, but none of them actually reached the same popularity as the Dan Brown’s Book. The Ninth Gate was based on The Club Dumas book by Arturo Pérez-Reverte, directed by Roman Polansky and with Johnny Depp and Frank Langella in the cast the project seemed to be a guaranteed success. Unfortunately, even though the atmosphere was good, the cast was great, the plot was involving, even the devil worshiping bit was interesting the film was too long and the ending was... just bizarre. Shame, because all the ingredients were there. 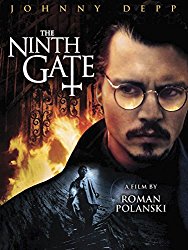 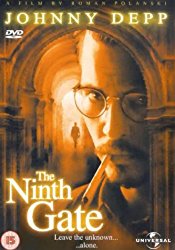 Creators of The Ninth Gate


Cast of The Ninth Gate