German journalist Peter Miller follows an ambulance that is arriving to a address, where elderly Jewish Holocaust survivor has committed suicide. Miller finds a diary of the dead man and reads the story of Eduard Roschmann, the SS officer, who ran the concentration camp. Miller learns that Roschmann survived the war and with help of secret organisation called Odessa he avoided being caught by Allied forces, so he wasn’t judged for his crimes. Miller is determined to find the whereabouts of Roschmann, especially since he was seen in Germany. But to catch Roschmann, or people that were helping him to hide, Miller will have to take a great risk...

Film based on the Frederick Forsyth novel tells the fictious story although the Odessa organization might have existed after World War 2 and helped former SS member to espace from Germany, change identity and avoid being jugded for their war crimes. Film is typical Forsyth story with elements of espionage, secret organizations and political elements. The only weak point is rather slow pace of the movie. 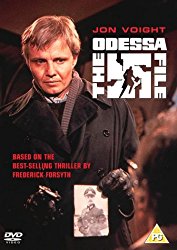 Creators of The Odessa File


Cast of The Odessa File