Brianne Hawkins, young woman married to mentally unstable husband Clay, is involved in a murder outside the bar. Police arrests both of them and Brianne is arrested. Her family tries to prove that Clay was the one who pulled the trigger even though she confessed.

Based on a true story of Brianne Hawkins, who was sent to prison for murder even though it was based only on her confession. 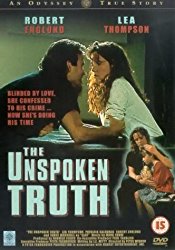 Creators of The Unspoken Truth


Cast of The Unspoken Truth