Roberto Bermudez is lecturer on university and a specialist in criminal law. One day he is surprised that young man that he knew, Gonzalo Ruiz Cordera, arrived from Spain and will be joining his lectures while preparing the thesis. Soon another event changes the life of the professor - waitress from the restaurant across the street from university is murdered and Roberto becomes involved in the case. Later he finds similiar crime that was committed in Spain and begins to suspect that Gonzalo could be responsible for both murders.

Argentinian mystery movie starring Ricardo Darin as law professor that becomes obsessed with finding the prove to his theory that his new protege could be a psychopath that killed at least two women. The film offers dark atmosphere, interesting plot and good cast, but feels a little bit dry - there is no tention, no drama, just suspicions and looking for evidence. Good movie, but could have been better.

Watch Thesis on a Homicide 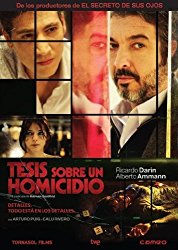 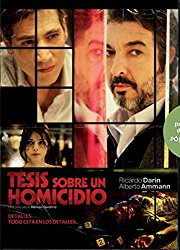 Creators of Thesis on a Homicide


Cast of Thesis on a Homicide