In early 20th century in one of the coastal cities serial killer lures young boys using a toy with image of a cat. Christmas is coming and police commissioner Herman is assigned to the investigation - a strict and uncompromising man, who as a single parent simply can’t reach his 15-year-old son Wiktor. Wiktor on the other hand looks up to his father, a police official, and starts investigation of his own hoping to find something that police won’t be able to find themselves and this way impress his father. But this journey will take them to a turning point in their lives.

Unusually for Polish crime movies dark atmosphere and very involving plot made this movie really remarkable. Based on a novel by Czech author Ladislav Fuks it is one of the more interesting European crime and mystery movies with elements that could be compared to Fritz Lang’s "M".

Watch Quiet Is the Night 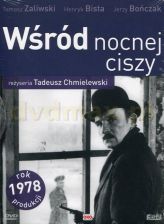 Creators of Quiet Is the Night


Cast of Quiet Is the Night