American Chris Smith lost a memory after car accident. Now he is about to leave the clinic and return to normal life, although he still can’t remember what happened before the accident. Mysterious benefactor have payed for his treatment and have rented a flat for him, Smith is determined to find who it was with only photograph of youn woman torn out of newspaper as single clue. But he has one more problem - he has nightmares about a murder of a woman he can’t recall. He moves into the flat, where he begins to hear strange noises and marital quarrels that trigger some strange memories. He finds the flat next door uninhabited and becomes more and more convinced he is going crazy.

British mystery movie with quite interesting plot in which one bizarre event leads to another and mystery is getting more complicated. Good cast and good script, perhaps not on Alfred Hitchcock level, but still worth to see. 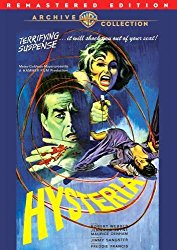