The film tells the fictious account based on real Soviet serial killer Andrei Chikatilo. Contrary to Citizen X in Evilenko we see the story mostly from the killer point of view with some insights into his mind. Unfortunately the creators based their movie partly on facts and partly on urban legends surrounding the case, which at the end gave rather mediocre effect. 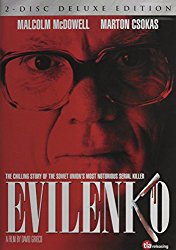