Doctor Malik is running small psychiatric clinic, he finds it hard to make a living out of it. One day some man approaches him in a bar with itriguing offer. He says that he is American intelligence agent Colonel Howard and offeres Malik a small fortune for taking a patient into his clinic, but not actually patient. He won’t know who the man is, all he has to do is keep him away from the eyes of other people. Malik agrees and takes the money. Just like Howard predicted strange people begin to turn up in Malik’s clinic and he feels he made a mistake in getting involved in a shady business.

French thriller and mystery movie about ordinary man caught into spy game where noone tells the whole truth. The plot is quite complexed and even at some points hard to follow, but the whole movie is very good. 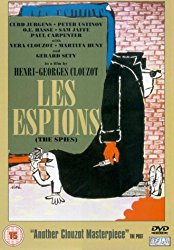 Creators of The Spies


Cast of The Spies