Four street magicians receive messages from mysterious mastermind, inviting them to meet him at given address. Each of them has its own style - Danny Atlas is illusionist, Merritt McKinney is hypnotist and mentalist, Henley Reeves is escape artist and Jack Wilder is a sleight of hand illusionist. When they meet for the first time at the given address they have no idea what to expect - they find the flat empty, but inside there are proofs that whoever invited them is illusionist himself and he has great plans for them. A year later they all work together as a group called The Four Horsemen and during their performance in Las Vegas, they declare that they will steal money live from a secured vault. To make it more interesting it won’t even be any local bank - they inite a audience member Etienne Forcier and plan to steal money from bank where he has an account - Credit Republicain de Paris thousands miles away. Live on stage they teleport Forcier to inside the vault, where he activates the air duct and soon the audience in Vegas is showered in money. Everything seems to be a great illussion until... it turns out that the money was really stolen from bank vault. FBI agent Dylan Rhodes is assigned to inestigate this strange case, but reluctantly he agrees to partner with Interpol agent Alma Dray. The Four Horsemen are arrested, but released soon due to lack of evidence. Nevertheless Rhodes feels they are guilty and begins to watch them closely.

Mystery movie about unusual duel between FBI agent and group of illusionists - each side tries to be a step ahead of the other, each tries to outsmart the other and simple investigation changes into a spectacular chase, surprising twists and fast-paced adventure thriller. The script was good enough, the cast was good, the action was good, but the whole project had some flaws - simplicity of the characters, some predictible events in the script and ending that was rather disappointing. Overall quite good and entertaining production.

Watch Now You See Me 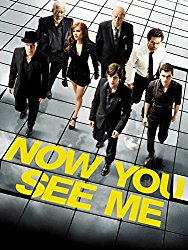 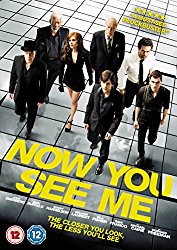 Creators of Now You See Me


Cast of Now You See Me