During a reunion of a military nuclear bomb unit Major Jesse Marcel recalls the events that took place 30 years earlier near small town known as Roswell, Texas. Local farmer found strange pieces of metal on his field and called the nearby airforce unit. What the military personel found on his ranch was something unknown... at least unknown on Earth.

Film based on facts and myths around the Roswell crash (but mostly myths). The plot is set around the officers that picked up the pieces of unknown metal and later were told by their superiors that officialy it was a weather baloon. But there were other witnesses and the film presents the stories of several different person. The film isn’t very subtle and pushes the plot far into the realm of fantasy, but on the other hand presents all the weak points of official explanations. 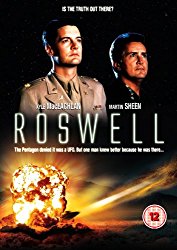