The Night My Number Came Up (1955, United Kingdom)

During a party Commander Lindsay shares with the guests the extraordinary dream that he had. In that dream he saw a DC-3 Dakota plane with eight passengers onboard that met heavy storm and crashed on the ocean shore. Lindsay saw a great deal of details, like the fact that one of the passengers will be Air Marshall, other will be beautiful girl, another will be very important civilian, another one will have a loud voice. He also saw the lighthouse close to the crash scene and a fishing village. The guests did not take this story seriously, even though one of them, Air Marshal Hardie, will soon take a plane to Tokio. But since he will be flying only with his assistant and they will be travelling on RAF bomber the story was just an anecdote. But soon Hardie learns that the plans have changed and in fact he will be taking a DC-3 Dakota instead of a bomber. Later he receives a call from Lord Wainwright, who would like to join him on the way to Tokio. He won’t be travelling alone, so together this would make 6 passengers. At the airport they are approached by 2 soldiers, who were late for their flight to Okinawa and seek the chance to flight with them. Together that would give 8 passengers onboard...

"The Night My Number Came Up" is one of the movies that is hard to be placed in a specific genre - it is sort of thriller, it is sort of adventure, it is sort of mystery movie. However we will call it it is a good movie with simple plot, but still it keeps the audience interested to the very end. The script was based on real events that took place in 1945 and British Air Marshal Sir Victor Goddard was the depicted in the movies as Hardie.

Watch The Night My Number Came Up 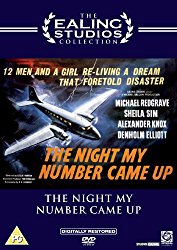 Creators of The Night My Number Came Up


Cast of The Night My Number Came Up