Shipping magnate Eric Benerall hires a team of unusual experts to finally solve one of the greatest mysteries of the world - the Bermuda Triangle. But his approach to the problem is unusual - he choses only four people: a newspaper reporter skeptical to anything supernatural, a psychic, meteorologist lecturer and an oceanographer. He wants them to find the answer to why few of his ships simply disappeared inside the Triangle causing him a lot of financial loses. He has the resources, they have to come up with the answer. And he does mean THE answer - he does not want theories, he does not want hypothesis, he wants a solid evidence what exactly happened. Large sum of money convinces them to take up the task, but soon it turns out Benerall wasnā€™t absolutely frank with them - one of his ships disappeared, but actually later returned with burned bodies of the sailors on the deck and surprising artifacts. Surviving crewmembers were so affraid they refuse to go below deck, the only thing they recalled was a strange looking storm that suddenly surrounded the ship. At the same time Meeno Paloma, a car mechanic from Florida, experiences strange events and he does not seem to remember his younger son...

Interesting mini-series about all the strange mysteries and myths surrounding the Bermuda Triangle, this time approached with a little twist - a billionaire wants to get to the bottom of the mystery even if it means using a skills of psychic or skeptical mind of a reporter. Good cast and intriguing premise were promising, but unfortunately all of it falls apart after the first episode and the ending is a bit disappointing. Still above average production. 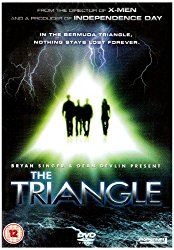 Creators of The Triangle


Cast of The Triangle