Jonathan Creek works as creative consultant to illusionist Adam Klaus and develops devices for his tricks. But with "help" of journalist Maddie Magellan he finds different use for his skills - he helps her solving the seemingly unsolvable mysteries.

The idea for the series was quite original - most of the times Jonathan Creek uses his skills to unveil solution how something was done instead of finding who done it (although in some cases he had to do it as well). And this idea worked brilliantly, at least until series 4 when Maddie was replaced with Carla Borrego, which didn’t really work - the chemistry was gone and the mysteries becomed more and more trivial. Unfortunately series creators decided to go on with yet another series with yet another actress as Creek’s sidekick, which is a shame. Because what they have done in first 3 series was brilliant and pity they didn’t stop when they runned out of good ideas. 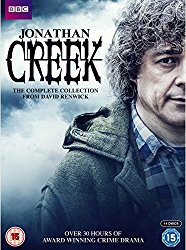